Here where we live in northern California, we boast the largest municipal park in the nation. Parts of it look like deep wilderness, until you hear a car horn from just a few dozen yards away. Other parts are truly wild, inhabited by bobcats, eagles, lynx, bears, and cougars. Some of our favorite and most frequently glimpsed wildlife are the deer.

For reasons I can understand (I’d feel the same way if I were a deer), they like to hang out on the golf course in Upper Park. The grass is well-tended and hunting is unlawful. Thus, the deer have little to fear from humans and, although not at all tame, they are unafraid if we don’t approach too closely.

One day last week, my hubby and I decided to take a short drive. We wanted to visit the neighbors. It didn’t take long to discover them. We found the yearling girls grazing peacefully together with the Boys’ Club slightly removed. A few minutes later, they wandered nearer and we got an even better view.

That’s when I chose to pay our friends a more personal visit. One of the young bucks lifted his head and twitched an ear, letting me know he was keeping an eye on me, but other than that, they behaved in a neighborly manner and we had a pleasant time.  This is just one of the things I love about the beautiful place where we live.

Susan loves to hear from readers. Write her at susan.aylworth.author@gmail.com, or visit www.susanaylworth.com or her Facebook page, www.facebook.com/Susan.Aylworth.Author. Watch for Amber in Autumn, Book 3 in the “Seasons of Destiny” series, coming near the end of September.

Writing is a lonely vocation. Most of it is done either alone in an office or with a cadre of imaginary friends inside the author’s own head. Occasionally, that cycle is broken and a group of writers gather. That happened for me this past weekend in Gilbert, Arizona, just outside of Phoenix.

I belong to a few different writers’ organizations, each with its own purpose. The conference this weekend brought together members of the American Night Writers Association or ANWA. Founded in October, 1986 by Marsha Ward and five other women, the group served mommies with young children. These mothers also aspired to be authors; some were already published and others saw themselves publishing one day. They wrote at night, after the children were asleep, hence the name/

The group that started 33 years ago in a living room now includes 350 members. About half are published authors; the rest aspire to be. Many members have years of publishing experience, multiple book contracts, and designation as best sellers on some impressive lists. Creative energy abounds. It practically buzzes in the air all around us.

When we combine large numbers of writers—who, by nature, are introverts—with the opportunity to network, teach, and learn, beautiful things happen. I attended workshops on everything from how to create emotional resonance, to writing inspirational non-fiction, to book marketing and taxes; met some multi-talented people, shopped in a store stocked with members’ books, and had the opportunity to share some of my own experience in the publishing industry. The weekend inspired, thrilled, impressed and exhaustedus all, but it was a lovely kind of tired.

One highlight came when I sat at a table with Marsha Ward, whose vision created ANWA and whose books—dozens of them—grace a number of different publishing platforms and top-seller lists. (That’s Marsha in black.) I’ve been to conferences before and I plan to attend more. Every one sends me away refreshed, invigorated, and eager to sit down and write. I can hardly wait to finish Winter Skye. Any day now. . . .

Susan loves to hear from readers. Write her at susan.aylworth.author@gmail.com, or visit www.susanaylworth.com or her Facebook page, www.facebook.com/Susan.Aylworth.Author. Watch for Amber in Autumn, Book 3 in the “Seasons of Destiny” series, coming near the end of September.  Books 1 and 2, Paris in the Springtime and  Sunny’s Summer are available in e-book and paperback formats. Winter Skye will follow soon. Stay in touch!

The writers’ conference I attended a week ago met in Gilbert, Arizona, in the Phoenix metro. I was born in the bordering city of Mesa and lived there until I was nearly 12. After my family moved north into Navajo country, we continued to visit Mesa several times a year to see grandparents and other relatives and to take care of the kind of business we couldn’t do in Navajo County.

My two remaining uncles, my dad’s younger brothers, and my husband’s one aunt, his mother’s sister, all live within 12 miles of the conference center. Seeing family again became a fringe benefit of attending this particular conference. It’s a bonus gift I will always treasure. 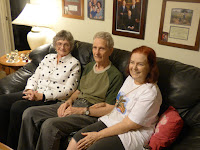 My Uncle Gary still lives with his wife, Aunt Lynn, in the home I remember from girlhood. Neither of them is in excellent health, but–considering they’re in their late 80s–they’re doing rather well. 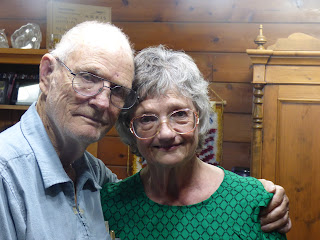 Uncle Harold, who just celebrated his 90th birthday, may be doing even better. He lives in a home he bought a few years ago, on the east side of the Valley of the Sun, drives his own car, and does most of his own cooking. Although he’s outlived two wives, he doesn’t lack for female companionship. He’s dating a widow named Rita. I remember her from the first time they dated, decades ago, before he met the “cute blonde” (his words) who became his first wife. 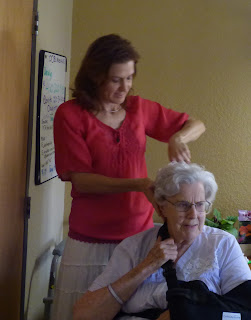 My husband’s Aunt Geniel, who is also 90, isn’t doing as well–at least, not lately. A couple of weeks before our arrival, she fell and broke her shoulder. It’s irreparable, but Geniel has an amazing pain threshold and says it doesn’t bother her much. It does bother the rest of her body, which is reacting to the stress of the physical insult even though it does not register as pain, rising blood pressure being the most obvious sign. We spent some time with his cousin, Donalyn, and visited Aunt Geniel in a rehab hospital, where Donalyn did her mother’s hair and Geniel shared stories about her family and girlhood. Despite the injury, she was in good spirits, and we enjoyed our time with her.

What a pleasure to see these wonderful people again! We don’t know if we will have the chance in the future. It’s a long way from northern California to the Valley of the Sun, and–although each person born comes with a lifetime guarantee–there’s no guarantee as to how long that will last. We felt privileged to visit them this time. Call it a fringe benefit.

As an added benefit, I took my spouse on a tour down memory lane, visiting the homes where I lived as a child. At the second home, the place where we lived for a couple of years before moving north, the owner came out, saw us parked at the curb, and invited us in to tour the place. Everything has changed over the decades, but it’s still much as I remember it, some of the major features left exactly as they were. We also saw schools I attended, parks where I played with friends, and a church building, now a school, where my family worshipped.

“You can never go home again.” So said Thomas Wolfe and the man got it right. It wasn’t home and hasn’t been for a long time. Both my grandparents’ homes, side by side, were long ago knocked down. A large church building stands where their homes once stood. My old church has become a private elementary school and my other schools have changed so much I recognized them only by their locations. Still, I felt the nostalgia of seeing it all again and remembering, just one more side benefit of showing up at last weekend’s writers’ conference. Thanks again, ANWA.